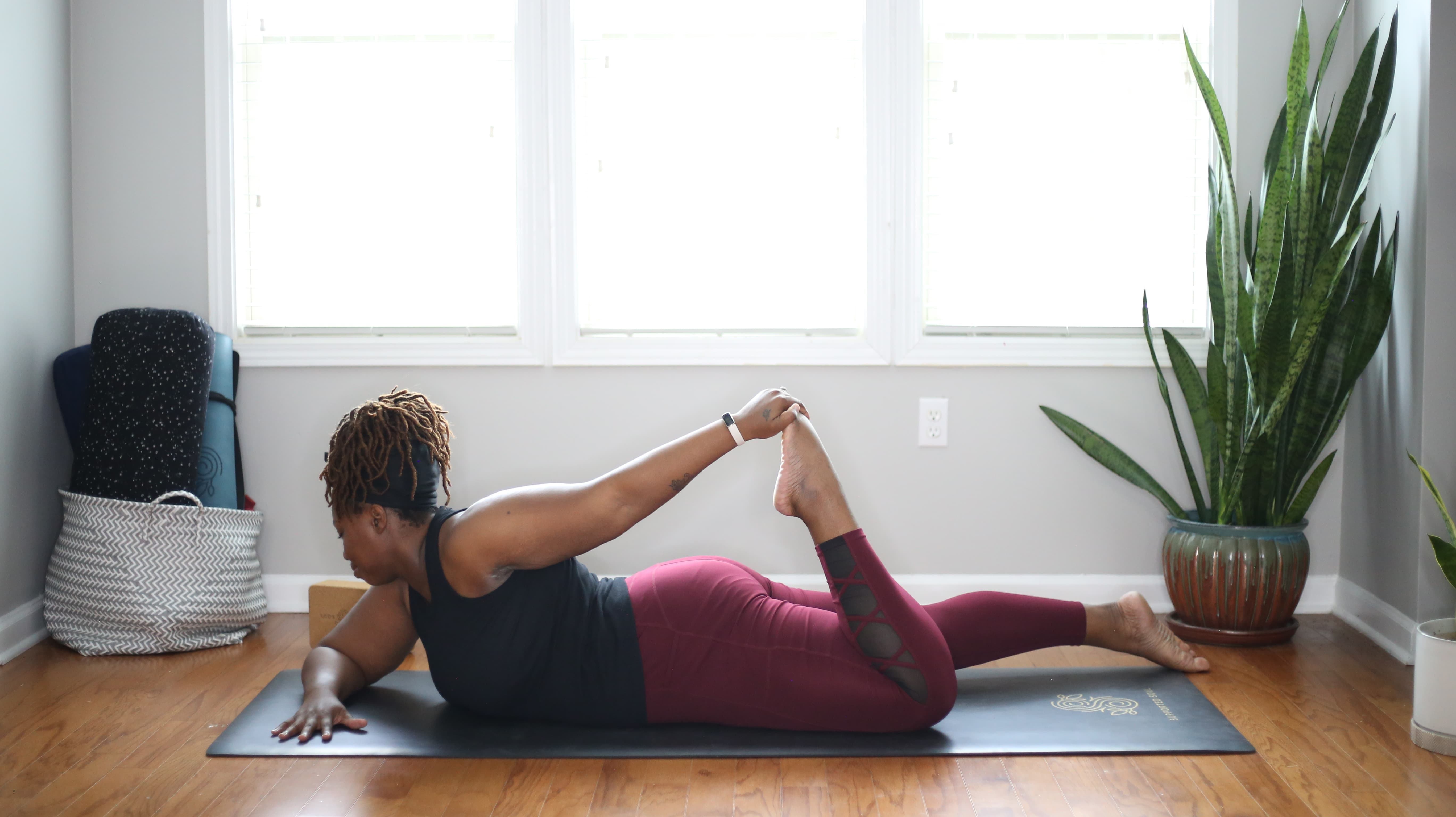 What is yin yoga?  Yin yoga is one of the most popular yoga styles because of its combined stimulating and relaxing energies. Yin yoga is a slow yoga style that emphasizes holding various poses for long periods of time. But unlike restorative yoga, yin yoga can provide a profound stretch for your fascia, resulting in strong joints and increased flexibility over time.

Regular yin yoga practice is one of the best ways to improve your overall mental and physical health and is the perfect adjunct to a regular active lifestyle or vinyasa yoga practice. In this article, we will go over the basics of yin yoga and answer all your burning questions about this fantastic practice. So, let’s get started!

What is Yin Yoga?

Yin yoga is a unique yoga style that draws upon the Indian yoga tradition combined with traditional Chinese medicine and Daoist philosophy. Yin yoga is a slower yoga style in which each pose is held for two to ten minutes or longer. The longer that you hold a pose, the more challenging it can be, but the main benefits of this practice come from these extended holds and learning to let the body soften and deepen into the fascial system.

There are three main principles of yin yoga that define this practice:

This first principle of finding your edge relates to the yin yoga concept of finding your individual point of sensation but not pushing past into pain. It can often be tempting to want to push your body into an extreme range of motion or to make your body look like how it does in the picture. But yin yoga emphasizes connecting to your own body and finding the right position for yourself based on the sensations in your body as you ease into the posture. Gradually your edge point may begin to change as you hold the pose, and your body begins to relax.

Stillness is one of the most critical components of yin yoga because it is the main principle that encourages relaxation of the body and mind. Unlike other flowing vinyasa yoga styles, yin yoga is about finding stability and stillness in the body so that your muscles can relax and access deeper into the layer of fascia that surrounds your muscles and bones. This principle of stillness also brings the energetics into your meridians and helps harness the power of meditation in each position.

Holding each yin yoga pose for an extended period of time allows the benefits of this practice to go deeper into your body. As you remain in each yin yoga pose, your body gradually begins to soften and release, allowing you to explore a new edge physically and mentally. The long holds in yin yoga practice also bring in a  deeper meditative quality to this practice and allow you to fully gain the benefits of each posture.

Why Yin Yoga is Good For You

All yoga styles are beneficial for your mental, physical, and spiritual health, but yin yoga has some unique benefits to offer due to the focus it provides on the fascial system. Your body is made of an intricate network of connective tissue called fascia that wraps around your muscles and bones, providing a protective, stretchy layer.

Over time, fascia can begin to accumulate knots or stuck points that need to be released. Some techniques for releasing fascia come through massage and various movement styles. Yin yoga is one of the best ways to release tension in the fascia because the long, slow holds in each yoga pose allow your muscles to completely relax so that the stress can move deeper into the body, into the fascia, and eventually into the bones, tendons, and joints.

Yin yoga is also one of the best practices for mental and spiritual health because it works with the subtle energy body known as the system of the meridians, and it tends to bring in mindfulness components as you remain in each pose for an extended time. Each yin yoga pose is an opportunity for deep meditation, to find comfort in the face of discomfort, and to access a deep inner quietness and stillness in the heart and soul.

Yin yoga is a generally safe practice, but like any form of movement, there are still some risks. Some yin yoga practitioners report occasional feelings of sickness or discomfort from the practice. Due to the depth of the yin yoga practices that bring release into the fascial tissue, this can sometimes release toxins that are more deeply held in the body. This natural cleansing process in the body may lead to some initial discomfort after the practice, but it will ultimately lead to more positive wellbeing in the long run.

Who is Yin Yoga Good For?

Yin yoga is good for people of all ages, genders, and abilities. The beauty of yin yoga is that it is a functional yoga practice that can be adapted to meet the needs of any student. Some other yoga styles remain more rigidly focused on alignment and how a yoga pose looks. In comparison, yin yoga focuses on how each pose feels to the individual person and encourages every student to explore their own body and find the position that works best for them.

Yin yoga is particularly beneficial as you get older because it helps to strengthen the bones and release tension that has built up over a longer period of time. Additionally, the slow and calming nature of a yin yoga class is well suited for anyone seeking deeper relaxation from their hectic life.

Where is Yin Yoga From?

Yin yoga has its roots in a range of philosophical systems and practices. The primary origin of yin yoga lies in traditional Chinese medicine, Chinese Daoist philosophy, and the Indian yoga tradition. The combined cross-cultural practice of yin yoga provides you with many of the core benefits of each of these profound practices.

Although yin yoga has ancient roots, it was only fully codified into an independent practice by a teacher named Paulie Zink in the 1970s. Paulie Zink was a martial arts and Daoist expert who created a unique form of movement involving both yin yoga and yang yoga movements. These practices were then further popularized by his students Paul Grilley, Sarah Powers, and Bernie Clark.

What Are Yin Yoga Poses?

Yin yoga uses many of the same poses as other yoga styles, but they have some unique differences. Firstly, yin yoga poses typically use different names from other yoga styles. Even though the positions may appear similar, yin yoga emphasizes a functional approach in which each student approaches the pose in their own way.

By using a different name for the poses, it helps students to break out of their habitual patterns in how they approach yoga poses and use their beginner’s mind in approaching each yoga pose from how it feels rather than a preconception of how it should look.

Some of the most popular yin yoga poses are:

The beauty of yin yoga poses is that there is a limitless variety of how these poses can look and how to adapt each pose to your individual needs. Some yin yoga teachers do not use props to support deeper movement into the fascia. In contrast, other yin yoga teachers emphasize using props to help the muscles relax, support the joints, and allow for a more relaxing and supportive practice. Each student and teacher can make yin yoga into their own practice.

Is Yin Yoga Good for Beginners?

Yin yoga is a perfect practice for yoga students of all levels. Whether you are an advanced yoga practitioner or a complete beginner, yin yoga can provide innumerable benefits to your body, mind, and soul. Many people believe that slower yoga styles are only well suited for beginners because they allow beginner students more time to get into the pose and discover their own bodies. But advanced students can also greatly benefit from yin yoga practices through the profound physical and mental exploration that this practice provides.

There are many different yoga styles, each with its own pros and cons, and yin yoga is increasingly becoming one of the most popular yoga styles worldwide. The calming and grounding effects on the mind combined with the stimulating and opening impact on the body give this yoga style a unique holistic focus that every yoga practitioner can come to love.